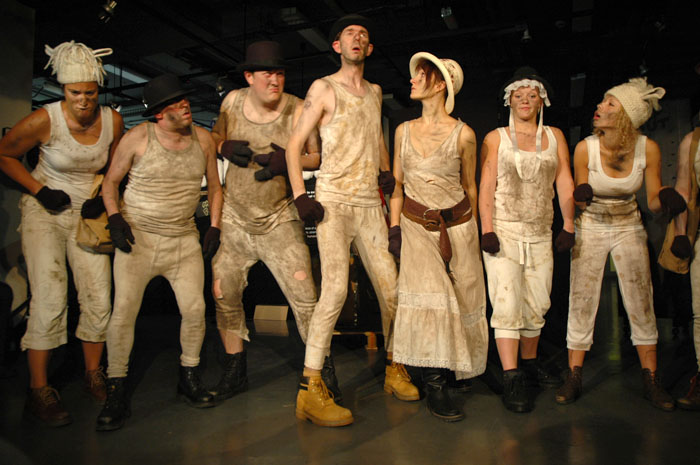 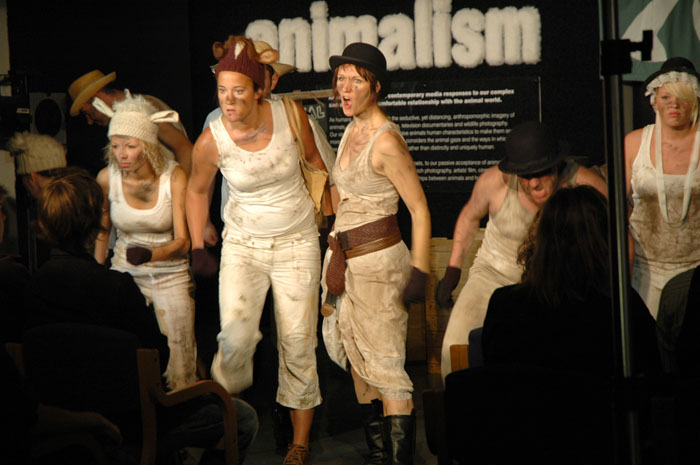 The cast members, from Paper Zoo Theatre Company, were kind enough to answer some questions for this blog post.

What appealed to Paper Zoo about bringing Animal Farm to the stage?

Stuart Davies, Director and ‘Mr Whymper’: I was very interested in working on a play with both a physical approach, and fairly simple technical requirements that would allow the acting to tell the story. The themes of social progress betrayed by the misuse of power, and radical ideas trampled underfoot, also seemed very relevant.

Julia O’Keeffe, ‘Snowball’/’Clover’: Yes! We live in a society where the best ways to get our opinions heard is to write a story, or a novel, or a song. All too often, if you voice strong beliefs that do not correspond to society’s constraints, they are laughed off as conspiracy theories. Orwell knew this only too well. This is mirrored in the pigs, who start taking decisions on behalf of the animals, believing them to be inferior—when actually they merely have different opinions and beliefs. If anything resonates today, it is the desperate need for people to be tolerant and understanding of each other’s beliefs, to be non-judgmental and to meet others with an open heart rather than criticism and sarcasm.

How easy was is it to get into animal character?

Jodie Bloomer, ‘Mollie’/’Hen’/’Cow’/’Sheep’: At first I didn’t find it easy because I was experimenting with facial expressions. But when I knew what look I was going for, it became easier—I got used to my characters. You get so comfortable about it that you forget how embarrassing it actually is!

How did the performances at our museum come about?

Ben Eagle, ‘Napoleon’: Fozia Bano, the Museum’s Cultural Events Organiser, saw our 2008 production of Animal Farm and invited us to perform in Gallery One, following the enormous success of our performance of 1984 at the museum in June. It didn’t take us long to decide! However, having to don those long-johns and vests is not something I’ll ever get used to…

What had to change to squeeze the play into Gallery One?

Damien O’Keeffe, ‘Benjamin’/’Old Major’: The main consideration was in condensing the action into a smaller space. We had to alter some of the blocking in the Battle of the Cowshed, and the scene where dogs chase Snowball from the farm. But the rest stayed pretty much as rehearsed. We had to be aware of the acoustics of the space too—making sure that we could be heard clearly was important.

What were you most worried about prior to your first performance at the museum?

Kate Shackleton, ‘Minimus’/’Sheep’/’Hen’/’Cow’: I was most worried about clucking in a sheep hat! There were also moments during rehearsal where we couldn’t stop laughing, and I was concerned I would crack up on stage.

Did the audience react as you hoped?

Rachel Greiff, ‘Sheep’/’Cow’/’Hen’/’Cat’/’Pig’: I think that the most encouraging feedback that we’ve had was from members of the audience who told us that they hated the pigs and wanted to protect the other animals. I was really hoping that people would feel that empathy for the ‘lower’ animals, because I think that their sorry fate as the pigs gradually take over is central to Orwell’s story.

Were there are any slip-ups?

Hayley Welsh, ‘Sheep’/’Cow’/’Hen’: From what I can remember there haven’t been any major slip-ups. Things have happened in performance that we haven’t covered in rehearsal, but we recover from these well. For instance, in a Saltaire performance in September, a pigeon gets thrown on from backstage—and once it actually hit me really hard on the head. The audience laughed and if I’m honest it was really hard not to laugh. But I managed not to and just did a little improvisation, a shake of the head and a little baa/bleat.

What was most memorable about performing within Gallery One?

Martin Knowles, ‘Boxer’: The challenge of performing in the gallery was fitting such a large cast into the confines of a small space. But it allowed us to have the audience in such close proximity that hopefully they felt part of the performance. We tried our best to be an extension of the Animalism exhibition and integrate the great exhibits into the production… although it’s probably the first time you may have seen a monkey on a farm.

So who makes the best animal noises?

Beth Oswald, ‘Lamb’: In my opinion Dave makes the best animal noises and he is very believable as a pig. However Kate also makes really good noises for each and every one of her characters—whether she’s a pig, hen, sheep or cow. But all of the animal noises I think are very realistic.

Tell us more about where you’re taking Animal Farm next.

David Peel, ‘Squealer’: If it was up to me it would go through the roof and off to the West End! After Saltaire, it’s off to Otley, Bradford, Hebden Bridge and Halifax. There are some fantastic venues to be had and great experiences to be gained. In the new year we take Animal Farm to the Carriage Works and then the Theatre Royal Wakefield—so exciting!

I love our version so much and the effort we’ve put in has been remarkable. Paper Zoo and associates alike have worked so hard. The shows we did at the museum were brilliant for us and a great grounding for the tour launch. The people at the museum were, as usual, their kind charming selves. The more work we do with the museum, the better we like it. 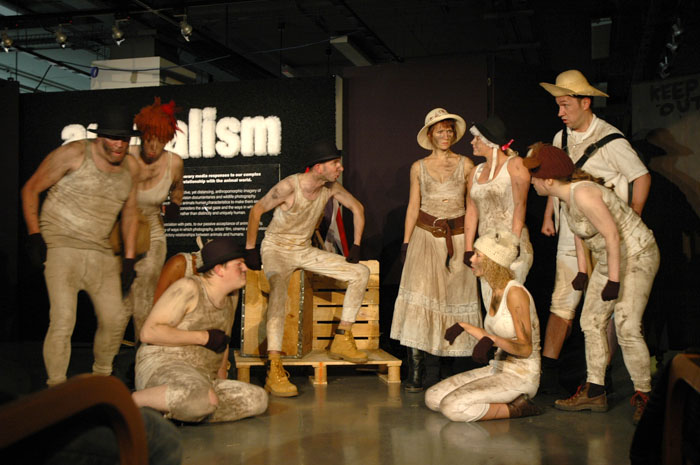 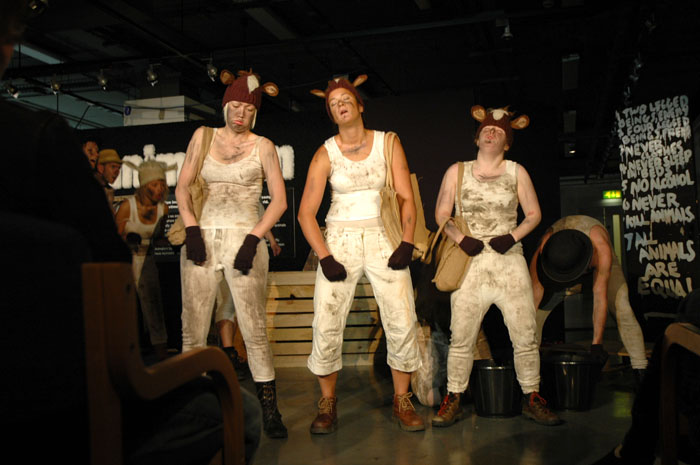