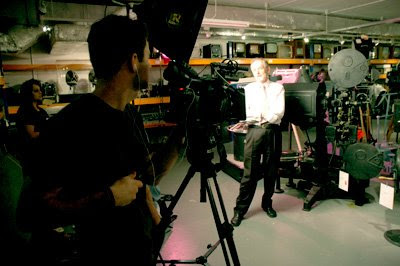 Due for launch early 2010, Sacred Cinema is a Canadian documentary that explores the enduring magic of film and cinema. And if all goes well, you should be seeing the museum and some of our staff in the movie—because the team behind the film was here yesterday, pointing their cameras at everything from Pictureville Cinema to our Curator of Cinematography Michael Harvey (above, and below demonstrating the Lumière Cinématographe from 1895). 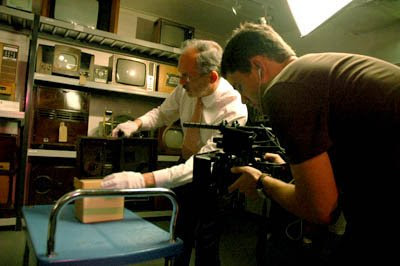 Producer and director Mark G Power and cinematographer Andrew Scholotiuk have been travelling the world since April, touring and filming the planet’s most interesting and important cinemas, for a film that they hope will prove ‘a love letter to moviegoers and theatre owners everywhere’.

They spent the morning filming the Cinerama screen in our Pictureville cinema—we’ve got one of only three public Cinerama theatres in the world. Then I caught up with them as they filmed Michael talking about the history of film and film projectors, against the backdrop of the television collection in our Insight centre downstairs.

‘When I saw This is Cinerama in Pictureville,’ Mark told me, ‘my heart exploded.’

‘It affirmed to us that we’re on the right track. After all, we’re going to places sight unseen. We don’t know what we’re going to find. But it’s extraordinary technically, this multiformat Pictureville Cinema. And it’s really the only true Cinerama theatre, installed to the original specifications.’

Keep an eye on the Sacred Cinema website to find out how the film’s progressing.

Find out more about Cinerama at Pictureville Cinema in this blog post.