By Claire Hamilton on 1 November 2019

Kicking off the 23rd annual Widescreen Weekend was Professor Rupert Till showcasing his research into sound archaeology. Specifically, the process of creating an immersive experience that allows viewers to get a sense of an aural, as well as visual, archaeological reconstruction. Before coming to this presentation, I knew little about sound archaeology but my curiosity and interest in prehistoric culture led me to Pictureville to discover more.

I wasn’t disappointed: the presentation was informative, clear and fascinating. The sheer necessity of such work is something that struck me because prehistoric cultures, with their ceremonies and mysticism, were predominantly aural cultures. This research incorporates the sounds of antiquity into the picture.

Another aspect worth recognising was the ingenious use of tech for the immersive film, for example using gaming software (Unreal Engine) to combine the graphical models with the sound recordings.

In a separate essay, Till discusses the methods of recording the cave acoustics using two very different techniques. One is the bursting of a balloon on a handheld sound recorder, the other more complex using sine sweep signals:

“These test signals gradually sweep a sine wave through all audible frequencies. The acoustic response of the space to these signals is captured, recording its sonic fingerprint or impulse response.”

Ancient caves, instruments and contexts are translated, perhaps enhanced, by modernity. Certainly, as Till comments:

“In such a context sound has an important role to play, to animate, to bring alive what could otherwise be a rather static and lifeless space.”

Let’s get to the film itself. First up were the Upper Palaeolithic caves of Altamira, in which the contours of the caves were actually considered and utilised in paintings and rituals. The ancient cultures of these caves have long been associated by researchers with rituals of shamanism and sympathetic magic (among others) which, for me, incited a spiritual lens on this part of the immersive film. Using traditional lighting (small torches or lamps) as well as traditional instruments (the flute made from vulture wing bone) to further enhance the simulation, these clips were mysteriously eerie. Moving through these spaces, captured on anamorphic 4K film, you could hear the changing acoustics not just between the caves but within them. 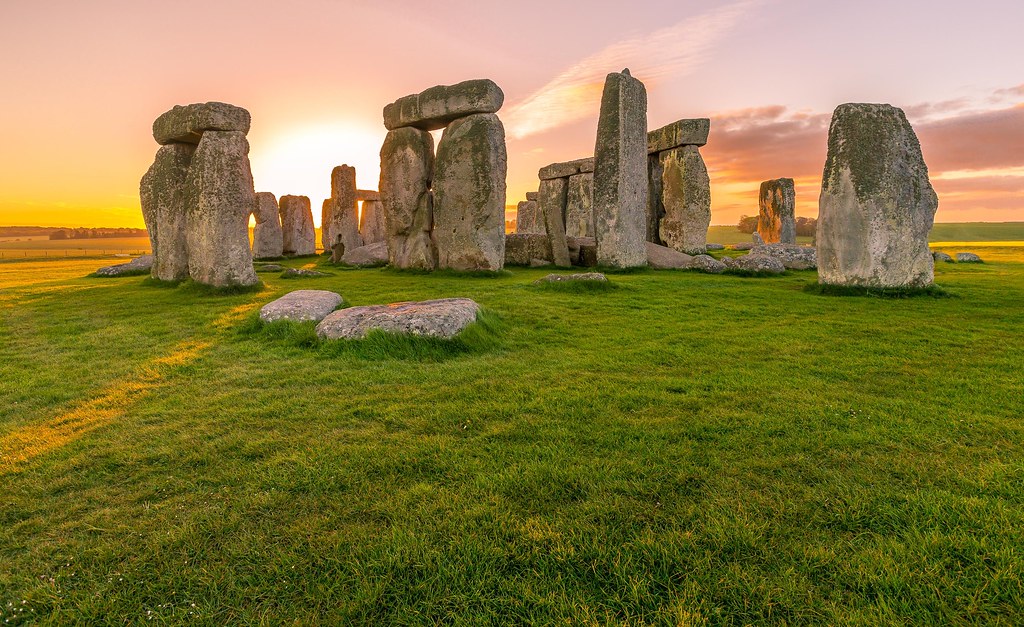 Moving on from an entirely natural phenomenon to a man-made site, we were now at Stonehenge. A Late Neolithic megalith, Stonehenge is presently only a fraction of what it used to be. However, the immersive film not only rebuilds the current stone circle, but also the original bluestone arrangements—it documents architectural changes by era as well.

In another of Till’s essays, he notes that weaving throughout the rocks produces different experiences:

“Each stone reﬂects sound, and the combined result creates unusual effects in the centre, and varied acoustics across the space.”

The experience of Stonehenge is multi-faceted, and this is especially apparent via the app. Not only can you experience different arrangements but also different times of day (midday, sunset and night). The 2200 BC night experience was beautifully tranquil with the, now rare, sounds of nightingales flittering all around you—I got goosebumps at this one!

Excluding the theatre at Paphos, the next few sites were ones I hadn’t heard of before. The Callanish stones on the Isle of Lewis in Scotland featured what Professor Till called the ‘Ghost Carnyx’ which were three ethereal carnyx players playing simultaneously. A carnyx is a sort of bronze trumpet, played vertically, with a snaked ‘s’ at the top which is skilfully fashioned into an animal’s head. The one played by John Kenney in the film has a boar’s head and its throaty, booming presence is somewhat poignant—as if it’s mourning the forgotten traditions and instruments of Callanish.

Yet one of the most effective sites to be recreated was the Hellenistic-Roman theatre at Paphos, highlighting not just ancient expertise in architecture but also their sophistication regarding acoustics. Completely man-made, the theatre was built firmly in accordance with its purpose—namely, a space where events such as plays, poetry recitals, political ceremonies, sport, etc, could be held. Therefore, acoustics were fundamental.

As with the graphical model of Stonehenge, Till and his team showcase their skills and expertise by producing a reconstruction of the site. We hear the lituus (traditional curved trumpet) and the aulos (traditional wind instrument) being played from the front as the camera pans throughout the venue. The differing acoustics are really apparent in this example, as we move further up the theatre the sound becomes less crisp, audibly there is more reverb as we ascend the seating. The film also visits two sites in Sweden, again using traditional instruments and sounds to immerse the viewer in the original context of the site.

The overall impression of the immersive film is one of wonder and exhilaration. It is a sensory experience which commands your attention as well as an appreciation for these ancient cultures. Beside the visuals, the team have made albums which showcase the traditional instruments. Till even revealed that he has compiled and created a remix album under the name Professor Chill which, I’m not even exaggerating here, is perhaps one of the best things I have ever heard.

The famous curved screen of the Pictureville theatre was perfect for immersing myself in this film, but don’t worry if you missed it! Experience it yourself: grab some headphones, download the Soundgate app and explore these spectacular sites.