We’re proud to welcome Emily Bell to give the keynote address—Emily is the Guardian group’s Director of Digital Content. We also welcome Rachel Millward, CEO of charity Birds Eye View; academic and broadcaster Rosalind Gill; and many more, including our exhibiting artists Neeta Madahar and Joanna Quinn.

If you can’t make it, don’t worry—we’re bringing you a snapshot of each session right here in this post.

10.37: Just back from Emily Bell’s very passionate keynote address. She believes that we’re on the brink of ‘a new age of feminised content creation, involvement and empowerment’—largely on account of the web and social media creating a situation where ‘the barriers to [media] entry are nil’. 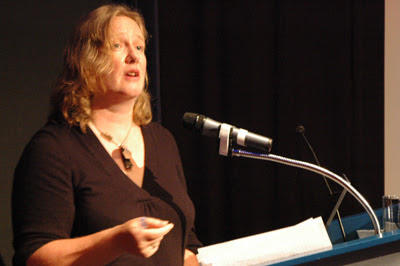 She believes there’s a long way to go: stories such as the Strictly Come Dancing furore get her quite angry (because of the gender angle: ‘the idea that there are four judges, and only one is a woman so they have to be swapped out’). She also pointed out that the current BBC organisation mainly has women in supporting roles, and that even the Guardian Media Group only has three women on its board of 12.

But Emily is still ‘optimistic’, because ‘on the web, women are beginning to take over’. They are the most active users of the social web, and because media—traditional and new—now have to engage with users, that gives women a great deal more power. She left us with the promise that ‘we’re on the border of a really, really exciting age’.

15.27: The picture below is from the talk ‘The Sexualisation of Culture?’, in which Rosa Gill, Jessica Ringrose and others discussed how women are sexualised in the media. 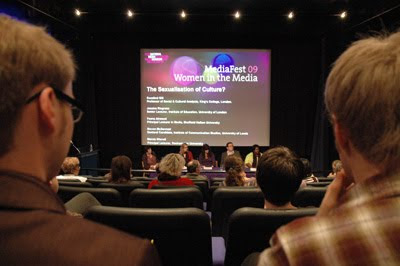 ‘Women in/and the News’, hosted by Karen Ross (pictured below), explored how women are treated by (and in) the media. Karen herself was mainly interested in female parliamentarians—she’s spent 15 years studying the relationship between women, politics and the media. She made the point that there are different expectations for women in politics: ‘whatever female MPs do, they can’t get it right’. Like Emily Bell, Karen highlighted that the problems aren’t just in how women are presented when they appear in the media, but also that they are often absent entirely. 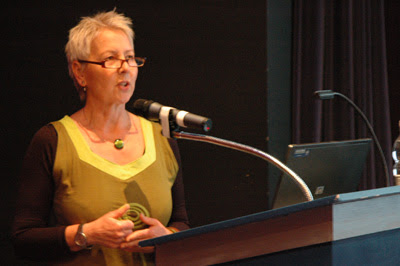 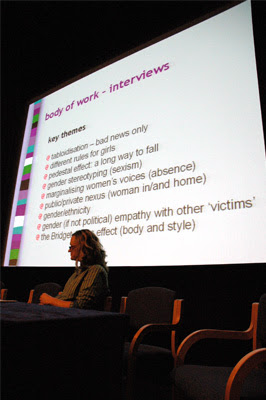 The second ‘Women in/and the News’ speaker was Sunny Hundal, the Guardian’s Blogger of the Year in 2006. He rounded on what he called ‘bodyfat journalism’—the increasing tendency of newspapers and magazines to report on female celebrities’ weights and physical appearance. ‘Celebrity news is big business,’ he said, ‘and not just in terms of print magazines’. According to Sunny, newspapers not normally associated with stories about stars are now increasing their celebrity coverage for easy web traffic. 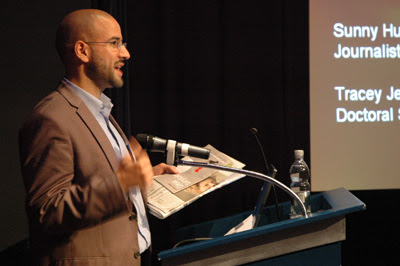 17.27: The final talk was ‘My Career in the Media’, with an all-star panel of female artists, producers and critics. It was a hugely enjoyable session—it overran by some margin as we were entertained by these talented women’s funny, fascinating and shocking stories. 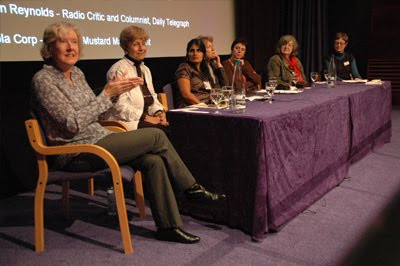 Joanna Quinn told us about how she went into labour at a crucial point in the making of a TV ad. Radio critic Gillian Reynolds—a ‘one-woman museum of media’, in her own words—told us a story about ‘The Giblet Queen’ that means none of us will ever look at Anne Robinson the same way again.

Vivian Fain-Binda—who fought for the right to work flexibly at the BBC after having a child—said that ‘trying to balance work and life was horrendous [in the 1970s]. It’s not much easier now, but at least it’s not a byword for leprosy’.

All the panelists stressed that it’s important to have a broad range of skills to be successful in the media as a woman. Liz Molyneux, Business Development Lead for BBC North, said that ‘adaptability is essential as we develop… I had a real passion to tell the stories I wanted to tell, but was persuaded to make light entertainment. It did teach me skills that I later used’. 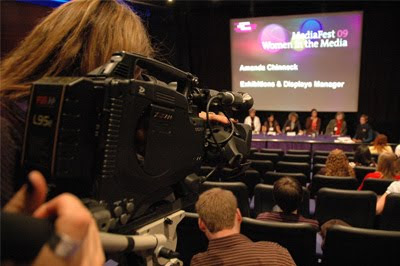 Kathryn Blacker, our Head of Public Programme, rounded off MediaFest09 by saying that two words had cropped up time and again: ‘anger’—about women’s treatment by the media and the industry—but also ‘optimism’—about women’s future role as new media and new opportunities present themselves.

It’s been a hugely successful day, with great speakers and fascinating talks and discussions.