Our new shows open on Friday 16 October 2009, and over the last two weeks, Mark has been watching our galleries transform from empty chambers to beautifully laid-out exhibitions...

Here’s my step-by-step guide to building a Joanna Quinn exhibition.

First job is to freshen up the walls and paint everything according to the exhibition plan. There’s a splash of red in the Joanna Quinn gallery. 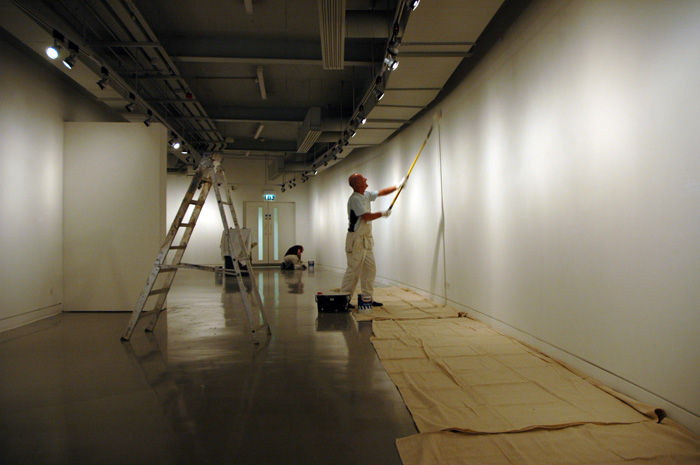 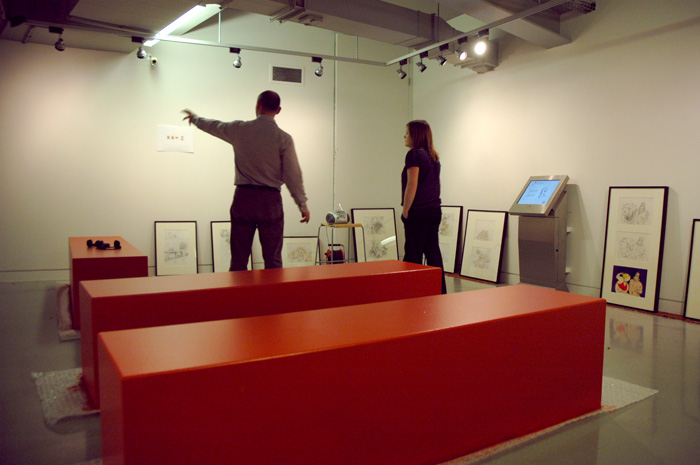 2. Bring up the artworks

Until now, all Joanna’s artworks have been safely stored in Insight, our collections and research centre, following the condition checking process. Now the sketches, drawings, and animation cels emerge from storage to be stacked on trollies by a four-person team. Bringing up the artworks is a delicate process, and much careful direction of trollies through lift doors ensues. 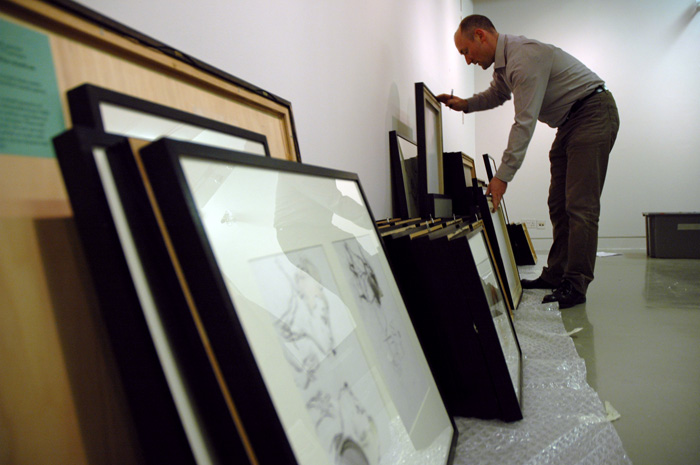 3. Lay the artworks out

With the artworks inside the gallery, Martyn Lenton and Michael Harvey place them on the floor according to their final positions on the walls. There are paper plans sellotaped up to show where everything goes. This is Michael and Martyn’s final opportunity to spot where things don’t quite work and make changes to the layout. And sure enough, several of Joanna’s sketches get swapped around at this stage. 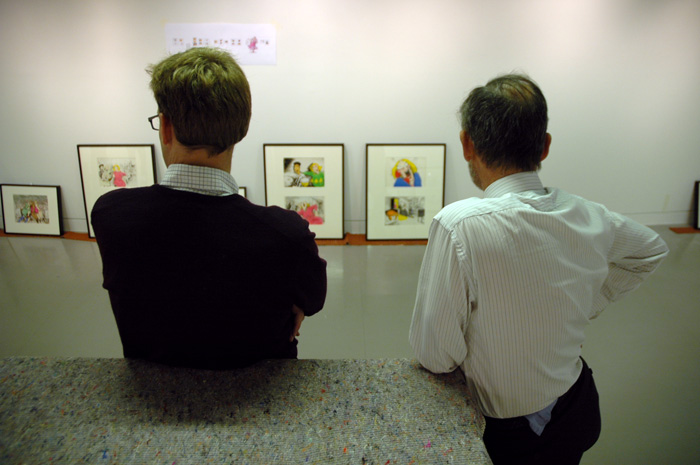 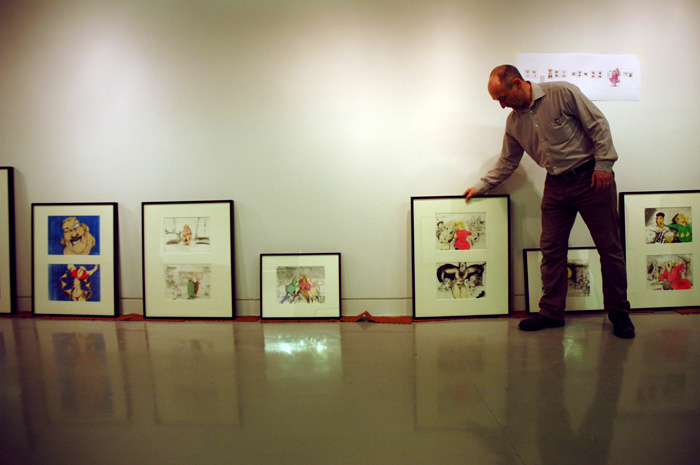 By the time I came in on Monday, the hanging of the artworks had already been done, and the gallery was looking near-complete (albeit a bit gloomy—the hanging of the lamps comes later). By now, our Joanna Quinn ‘interactive’, a hands-on presentation running on a PC inside a metallic stand, had also been installed by Assistant Gallery Developer Sven Shaw. 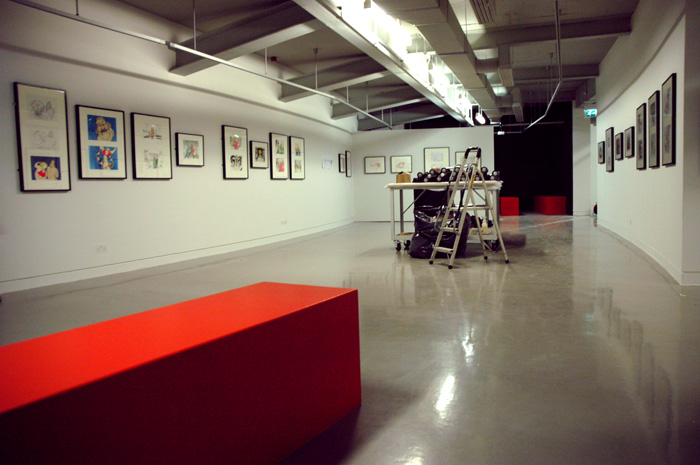 Two things here. First: apply the ‘vinyl’ graphics, which work very much like car window stickers—peel off backing, stick onto wall. Of course, much more care needs to be taken with our stickers, to make sure they’re straight and don’t develop pesky air bubbles. The text-based titles (see the little ‘archive’ sticker in the photo below) are created by ‘a very expensive machine’ which cuts the individual letters out of a plain red sheet. 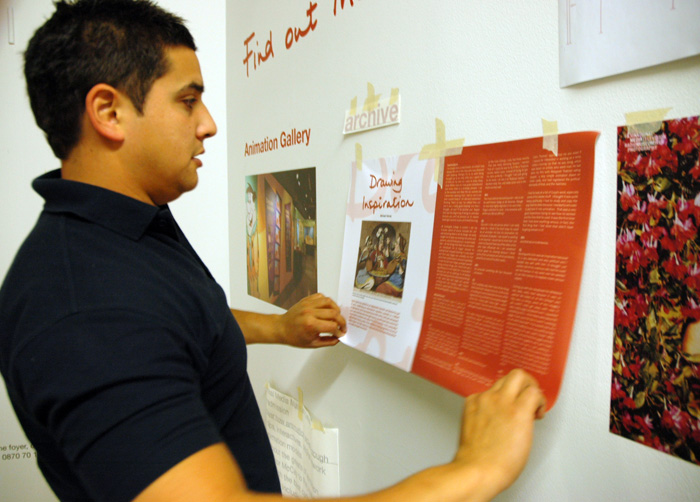 The second job is the big graphics. We’ve got two in the Joanna Quinn gallery: the cuddly Charmin bear, and ‘Flamenco Beryl’ from Dreams and Desires: Family Ties. They’re essentially giant posters that go up on the gallery walls like wallpaper. Apply glue with brush; lift and place (it’s a two-man job); and then all that’s left is the final satisfying task of smoothing everything down. 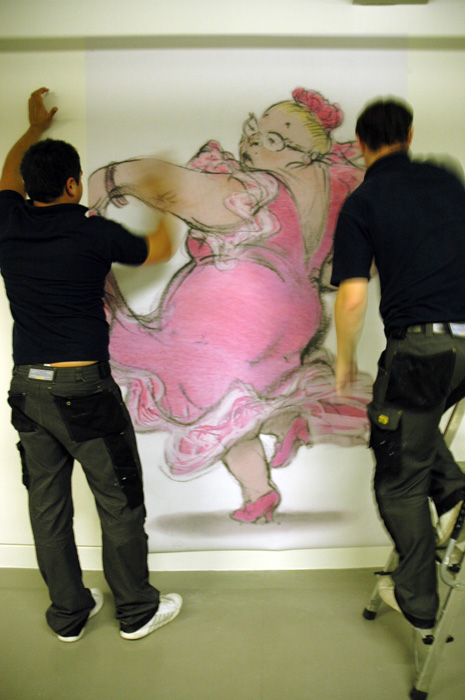 Step six is hanging the artworks on loan from other institutions—we have a Goya, two Lautrecs, two Gillrays and a Degat: all examples of art that has influenced Joanna’s own style.

Then comes step seven: adding the artwork captions, fixing the lights, cleaning up… and then opening the doors to you.

All the photos above, plus many more I couldn’t squeeze in, are available in a set on our Flickr account.

The process for our Neeta Madahar exhibition in Gallery One, which will also open on Friday 16 October 2009, has been much the same: paint the walls, bring up and lay out the artworks, hang everything up, apply graphics.

Bu, because Gallery One is bigger, there’s much more scope for the organisers to actually design the exhibition layout, putting in new walls to create corners, cubbyholes, rooms and spaces. So you can walk in on the builders actually rolling walls around… … and taking all manner of sharp and heavy instruments to bits of wood and metal. The holes above won’t be visible in the final gallery. They’re where we’ll display screens showing Neeta’s beautiful Solstice, two 24-minute time-lapses of 36,000 stills that track the summer and winter solstices. One wall will be summer; the other will be winter. And instead of builders inside that room, it’ll be you, watching the video.

You’re already familiar with the process of artworks being brought up, carefully laid out on the gallery floor, then studied for possible changes. Sharon Scarmazzo and Ruth Haycock brought the artworks out of their hiding place this time, then Sharon and Greg Hobson paced the floor making their final decisions about placement. Like Animalism previously, this exhibition has made the most of the expanse of wall outside Gallery One. The gigantic letters pictured below might not be furry, but, believe me, they’re just as impressive to stand in front of. To finish off, here’s a side-by-side comparison of how the rear of the Neeta Madahar exhibition looked two weeks ago, and how it looks now. Things happen fast around here.