Our animation festival is over for another year—here are some of the highlights, from fantastic guest speakers to Doctor Who videogames.

BAF’s audience is always a joy to see—a devoted bunch of enthusiasts, industry professionals, industry hopefuls and students just starting out on the road to a hopefully brilliant career. Enough of the scene-setting… on with the show. The first session of the day was an exclusive with Tim Appleby and Lauren Austin from Splash Damage who talked about the concept art and character design behind one of the ‘most queued-for’ games at this year’s Eurogamer Expo: Brink.

A round of applause followed the cinematic trailer—there is a definite buzz surrounding this game. The pair took us through the story, the style of the two main factions, how they developed those styles, and then on body types, character customisation, overlays and tints… Everything from initial concepts to facial hair.

One thing which does stand out about Brink is that there is not one recognisable character, but about 20 of them, each with their own name and identity—a useful tip for game character designers.

‘Customisation doesn’t lend itself to quality’, but Splash Damage wanted to focus on the quality, and in doing so discovered that ‘limitation spurs invention’. Now, I couldn’t go into too much technical detail—partly because you might not understand it, mostly because I certainly don’t—but it does make a lot of sense.

For example, all heads need to be the same width to ensure the head gear can be used for all characters, so instead they played about with length.

Lauren clearly had a lot of fun developing these characters, sometimes taking her inspiration from celebrity mashups (Danny Trejo vs Jason Statham, anyone? Sounds post-apocalyptic to me!).

And in a sea of post-apocalyptic first person shooters, this game stands out. Not only is it colourful, but it has a whole range of characters and customisation options which helps with player investment and gives Brink an instantly recognisable look. 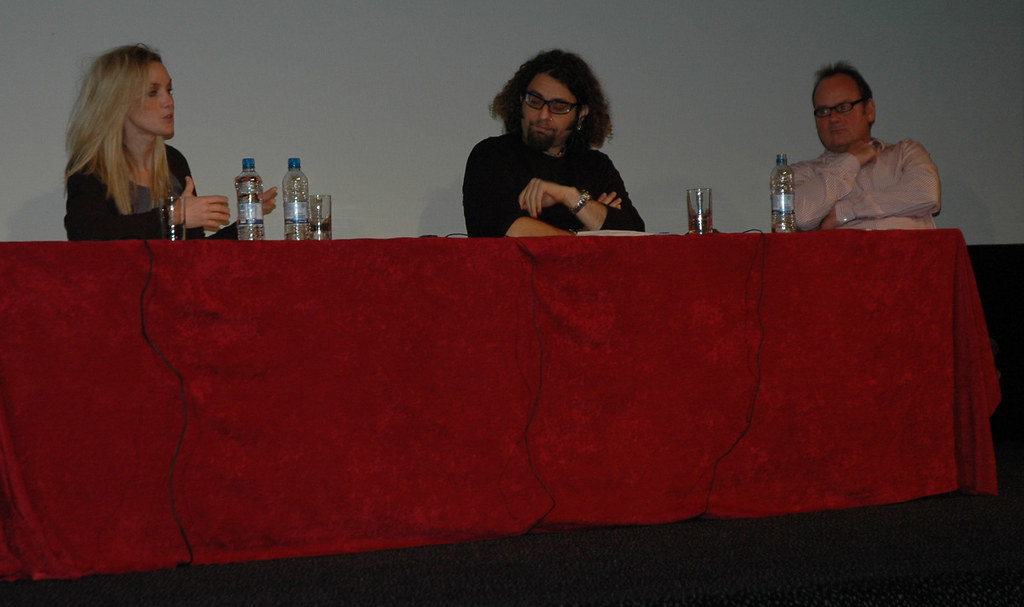 BAF welcomed back legendary games developer Charles Cecil (last seen at the museum acting as an official invigilator when we beat the world record for simultaneous Nintendo DS gaming) alongside Sean Millard from Sumo Digital and Anwen Aspden, BBC Executive Producer. All were here to talk about their involvement on the Doctor Who: Adventure Games series.

So why did they do it? The BBC had planned on producing four interactive episodes for the latest reincarnation of the series, but went one step further and created something special with free downloadable games—over 1.6 million downloads so far, and more episodes to come.

The pitch went out all over the world, but landed in Sumo’s lap. Charles had worked successfully with the Sheffield-based company before (on Broken Sword) but it was their grasp of the brand and production values in only two scenes of their pitch video which sealed the deal.

The Doctor—with sonic screwdriver acting as a skeleton key allowing him to go virtually anywhere, and his tendency to negotiate rather than fight—is an unlikely game hero, but Sumo overcame these issues by using avoidance, discovery and infiltration. The developers also need to ensure that they didn’t assume gaming knowledge nor make the game too complex for Doctor Who’s expansive audience range.

Sean is obviously thrilled that he was given the opportunity to create a Doctor Who character—the Cyberslaves—which could potentially appear in a televised episode. He claims it’s the coolest thing he’s done during his 20-year career. Charles went through the process of creating the Cyberslaves under the protective guidance of the BBC, and concluded that it is the human behind the monster which is most frightening.

The actors’ (Matt Smith and Karen Gillan) movements were shot using rotoscope rather than motion capture, which enabled Sumo to animate the characters in game. The resulting facial textures were too realistic and the BBC felt that it was ‘too dark’, so removing the texture and smoothing out any lines was the computer equivalent of putting the actors into makeup. An interesting analogy.

‘The second coolest thing’ for Sean is seeing his company’s game advertised during primetime—this level of publicity is generally a rap on the knuckles for disrupting the nation’s youth.

Charles revealed that his experiences working with the BBC on the Doctor Who Adventure Games are ‘a lesson in how to market’: keep it a secret, then blitz it and surprise everybody.

During the Q&A we learned that the funding for the game came from public service money, but it created such a buzz at Comic-Con that there are plans in place to sell it abroad.

The audience expressed a desire to see some of the Doctor’s previous incarnations crop up in the game, and the team, as passionate as they are about the brand and their product, clearly hope so too. And so the celebrated heritage of the Doctor continues. 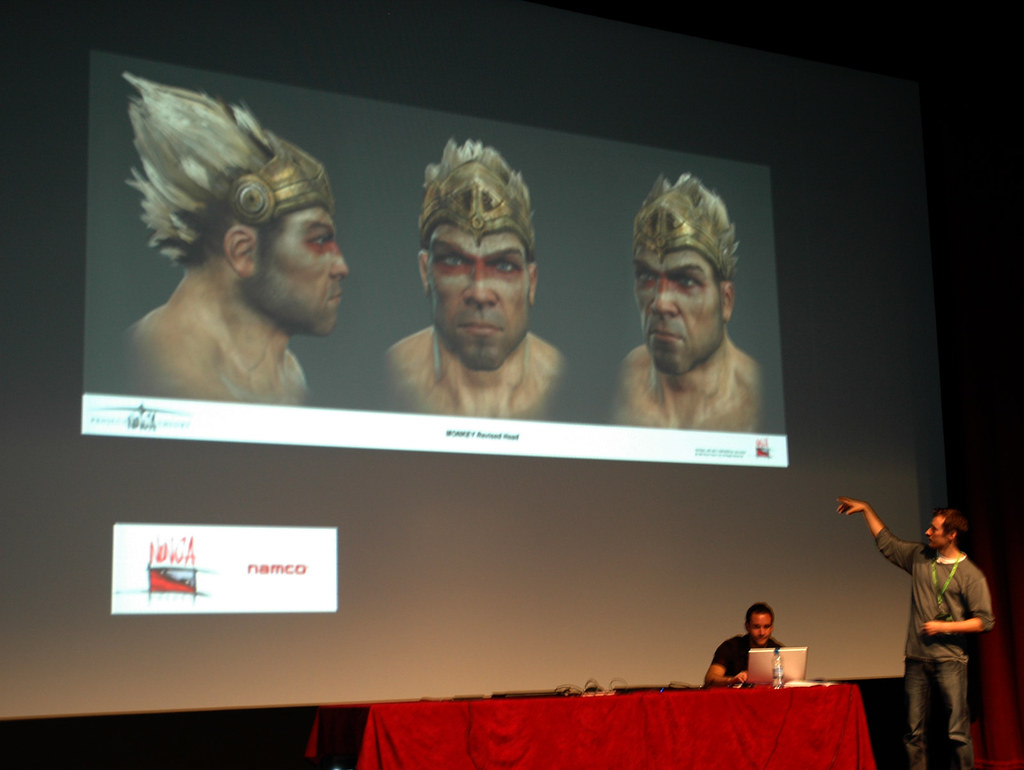 Based on an ancient Chinese story, Enslaved: Odyssey to the West is the latest game produced by Cambridge-based studio Ninja Theory. Their Lead Animator, Guy Midgeley, and Senior Animator, James Stevenson, joined us to talk about character animation, narrative, and the involvement of actor Andy Serkis and writer Alex Garland in the project.

It was important to consider character interaction and realism. Originally, Monkey had a brutish nature and Trip was a futuristic goth, but the two characters need to relate to each other as their relationship builds, and so their physical forms were toned down for congruity.

For fidelity, ease and so the characters can perform actions in-game that you can’t recreate in real life, the in-game animation was hand-drawn rather than produced using motion capture. We were shown a series of videos shot at Ninja Theory HQ, with the team acting out some character motions used as a reference point for their animations—a process which the team highly recommend in order to understand how the body works and create realistic looking in-game movement.

To avoid videogame cliches, Alex was brought in as a story writer, and Andy Serkis came on board as cinematic director and actor for the cut scenes which were shot using motion capture; he had worked with the team previously on Heavenly Sword. The cut scenes drive the story, develop characters and give the game a cinematic feel. To avoid the pitfall of disconnection between cut scenes and gameplay, Alex was involved throughout the process and played through the game to ensure its integrity.

In summary, the talk was a useful lesson in story and character development, with the audience being taken through Ninja Theory’s creative process and what to consider when you want a cinematic game with a decent story.

Day one of the festival came to a close with the Guardian Tech weekly podcast captured live in Pictureville Cinema. Hosted by the Guardian’s games columnist Keith Stuart, the session featured interviews with the aforementioned Charles Cecil, writer and journalist Kieron Gillen, and games artist Dan Pinchbeck.

The second day of the BAF Game talks took place up the road from the museum in the luxurious surroundings of the Great Hall at the University of Bradford.

Tim Heaton, Studio Director at the Creative Assembly, kicked things off by talking about the history of the company and explaining all the different roles in the team behind the BAFTA-winning Total War franchise. Tim also talked about the devout following the Total War games have attracted, and revealed that the award-winning strategy games have nearly 1 million players with an astounding average play time of 91 hours.

Next up was Adam Green, Director of Assyria Studios, a small independent development house; Adam formed it last year during his university gap year. Assyria specialise in addictive, casual games for mobile platforms and have already caught the attention of Sony and Apple. Adam’s talk was an inspiring presentation with lots of practical advice on the challenges of setting up your own studio.

Continuing the casual game theme, Simon Barratt from Bradford-based studio Four Door Lemon then spoke about the ins and outs of making games for Apple devices such as the iPad, iPhone and iPod Touch.

3D glasses were given out to the audience in the afternoon so they could enjoy Ian Bickerstaff’s talk about the history and uses of stereoscopic 3D technology. A Senior Engineer at Sony, Ian is heavily involved with the recent push behind 3D technology. He explained how to get the best results from using stereo 3D in games to create more immersive experiences.

A fervent crowd welcomed Andy Brunton to the stage; lead animator at Lionhead, Andy has worked on both Fable 2 and Fable 3. He revealed how the animation team works with coders to produce seamless interactive game characters. Andy showed lots of examples of animation tests and even added a few rather brutal execution scenes that got cut from the final game.

The concluding panel session chaired by Game Republic’s Jamie Sefton offered perspective on how technology impacts the games industry, particularly relevant considering the day’s release of the Microsoft Kinect peripheral. The discussion carried on over drinks in the University atrium before the Street Fighter 2 tournament took place in our Games Lounge. Professor Paul Wells sat in conversation with three of the Nexus team: Alan Smith, Adam Foulkes and Jim Le Fevre, before which the audience were treated to a retrospective of their work, which includes (impressively), an Oscar-nominated short, Grammy-nominated and MTV Award-winning music videos, and Cannes Grand Prix, Gold Lions and Black D&AD Pencil-winning commercials.

The three talked about how they got into animation, and early successes during the Channel 4 animation boom. At this time, animation was embraced by the commercial market, and though there is an assumed schism between arts culture and commerce, the commercial world provides the necessary revenue to move individual talents forward.

Despite this, Nexus advocate choosing work wisely and trying out new styles wherever possible rather than returning to a comfort zone. All three are still very much exploring the craft of animation, remembering that ‘form follows feasibility’.

When asked about the tension between old and new school animation styles, their resounding opinion is ‘digital tools? Bring them on!’. For Jim, sometimes the most satisfying thing is the context of the animation, not the visual finish—he cites as an example the Beefy and Lamby series of adverts.

An interesting discussion took place around the issue of archiving—obviously something that’s very close to the museum’s heart. Adam, Alan and Jim say that they almost never think about it, though they recognise the importance of preserving their output for future generations, having experienced animation being exhibited alongside art which is generally considered as belonging to ‘high culture’.

Somewhat surprisingly, according to the three, animators don’t consider that their work is worth saving even though they realise the importance of other people’s work.

Thanks to Adam, Alan and Jim, for their insight into animating for the commercial world, and their resounding passion for the art of ‘making stuff move’.